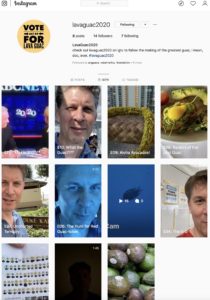 Pictured above: Waynee’s Instagram guacumentary masterpiece. Go to your Insta and search for #LavaGuac2020. You’re in for a treat.

Well, it was the 20th anniversary of this ridiculous party, and it was a worthy celebration! The weather was perfect, the turnout was higher than in years, and the competition was as delicious and creamy as ever. I was reminiscing with some long-time guests about how Guac Bowl has evolved over the years — from a humble competition among roommates and close friends, to a giant drunken celebration of creativity and too much free time, to a family-friendly gathering with tons of toddlers and kids running around. It seems like just yesterday we were using a Guacket Launcher to blast booze onto our faces… and then in the blink of an eye, we go through almost as many juice boxes as beer bottles.  In every incarnation, it’s been a blast, and I can’t wait to see how the party continues to change once our children put us in nursing homes.

First, as always, check out the photos here.

Now, onto the awards:

1st place: “Chicavocado Guac” by Michael Zimmer
Three-time Alternative champ Michael Zimmer missed out on a trophy last year, but returned strong with his first win in the Traditional category! Having recently moved to Chicago, Zimmer flew in for the party and represented his new hometown with this Windy City inspired creation — complete with sport peppers, celery salt, giardiniera and other “Chicago Dog” fixin’s. Was it truly “Traditional”? Maybe not. But it was certainly delicious, and the judges crowned it… a wiener.

2nd place: “Basic B*tch Guac” by Meghann Barloewen
What is the guacamole version of an Uggs-wearing, pumpkin spice latte-sipping, Michael Kors bag-sporting Basic Bitch? This guacamole from Meghann, which was basic through and through. No tomatoes and lots of red onion, and the people ate it up.

3rd place (tie): “Dwayne ‘The Guac’ Johnson” by John Dusenberry & Sara Feiss
We had a rare three-way tie for third place, as there were just too many delicious guacs this year that split the vote. This one had a very punny name and was as strong, muscular and charming as The Rock himself. Nice work from the first-timers John and Sara!

3rd place (tie): “The Guac Place” by Travis Mutchler
Travis came with a guac inspired by the hit NBC comedy “The Good Place,” and like the show itself it was clever, surprising, and forking delicious. But strangely it didn’t contain any Yogurt, Yoghurt, or Yogurté.

1st place: “There Will Be Guac” by Jordan Boeder & Amanda Lindemann
Like a modern day Daniel Plainview hellbent on success, Jordan and Amanda finally struck oil with a real trophy, after being awarded the Icarus in 2014. There have been lots of frozen guacs over the years (ice creams, popsicles, etc.) but never a milkshake. Inspired by the “I DRINK YOUR MILKSHAKE!!!” scene of There Will Be Blood (complete with bloody bowling pin), this entry went down smoother than a Daniel Day Lewis performance.

2nd place: “Guaky” by Angela Pava
Angela was back with another adorable creation, this time a guacamole version of everyone’s favorite Japanese treat, Pocky. She covered thin breadsticks in white chocolate infused with the oil extracts of avocado, jalapeño and lime, with a little lime zest thrown in too. Some people loved them. Some people thought they were disgusting. But we can all agree, whoever did the photoshopping of the boxes while Angela watched our child, he’s the real hero.

3rd place (tie): “Guacstachio” by Maggie Flynn & Ian Nyeste
Maggie and Ian always bring it, but they were unable to defend their Alternative trophy with this year’s entry, a pulverized pistachio paste they called Guacstachio. Like the experience of eating pistachios, this was a lot of effort for not enough payoff. Unfortunately, it took a shell-lacking.

3rd place (tie): “Spoons Out” by Dave Allen, Lauren Edson and family
Dave, Lauren and their kids were inspired by Rian Johnson’s whodunnit “Knives Out,” and gave us the guac equivalent, “Spoons Out.” Like the movie, it was a brilliant deconstruction of familiar elements — in this case, individual spoons served with a slice of avocado and an alcohol-infused cherry tomato. For mature audiences only. The twist (of lime) ending? That these didn’t get more votes!

1st place: “Schoolhouse Guac” by Adam Pava
My entry this year was an homage to Schoolhouse Rock, the educational cartoons of our youth. I played the music videos on a “vintage TV” (that I made from cardboard and a well-placed iPad), and paired it with a real vintage Playskool schoolhouse (the very one I played with as a child at my Grandma Esther’s house, which has since been passed down to my son Alvy). Inside the school was guacamole topped with Alpha-Bits cereal, since, uh, I wanted something sort of educational-theme-y in the guac itself and couldn’t think of anything better? Anyhoo, this is what happens when all the other people who used to make giant entries move away. I win.

3rd place: “#LavaGuac2020” by Matt Waynee
Okay, this was a real special one that didn’t get nearly enough love. My old pal Waynee, who I believe hasn’t entered a guac in over a decade, decided to go big this year for our 20th anniversary of the party. As a screenwriter and teacher of filmmaking, he made a 10-part “guacumentary” that he posted on Instagram TV in segments over the last week. You seriously have to watch it — go to Instagram and search for #LavaGuac2020.  It all started a few weeks ago when he TRICKED me and a bunch of our friends by sending out an email claiming that his students were studying documentary filmmaking this year, and they needed footage to practice cutting… so he asked us to all improv a few interviews about “Mr. Waynee, the great documentary filmmaker who would do anything to get the shot.” So a bunch of us emailed him videos for his class — only, they weren’t for his class, they were for this Guac Bowl entry. The premise of the film was that Waynee had less than a week to find the perfect avocados for Guac Bowl, so he booked a last-minute airplane ticket to Hawaii where legend says there are the most delicious avocados. We see footage of Waynee on the plane, and Waynee in Hawaii interacting with locals, and Waynee in a submarine looking for “the rare aquatic avocados” which turn out don’t exist. Ultimately, he finds some great avocados but can’t take them on the plane home because of Customs laws. So at the last second he buys Trader Joe’s pre-made guac and brings it to the party. Did he REALLY go to Hawaii? Was it REALLY just for this entry? These are questions that were never answered, and perhaps never will be. Like many complicated documentary subjects, the protagonist’s motives are questioned and the takeaways are unclear… but we all get to feel superior for having watched it.

1st place: “Guac Pops” by Maurissa Horwitz
Some years, the Icarus Award unfairly ends up being won a guac that TRIES to be bad in order to win, or a guac that’s just plain gross… but other years, it goes to a guac truly worthy of the award’s namesake. This is one of those years. Maurissa clearly tried hard, putting thought and preparation into making something special — Tootsie Pop style lollipops made of guac. But how do you get a ball of guac to stay on a stick? Maybe freeze them, cover them in Panko? Sure. The problem is twofold: one, the shocking experience of biting into something labeled like a Tootsie Pop but turns out to be ice cold; and two, once they stop being ice cold, the balls of guac slowly dripping down the sticks, creating a mess. Perhaps Maurissa was not unlike the mascot Mr. Owl himself, who always asks how many licks does it take to get to the center, only to succumb to his desire for instant gratification. The answers will remain forever elusive.

2nd place: “Don’t PIT All Your Eggs In One Basket” by Audrey Handelman
Audrey showed up as a first timer with an impressive looking display — a giant basket of avocado halves each filled with a baked egg, topped with tomato and scallions. The egg yolks gave the impression of avocado pits. Pretty clever! A few reasons why this may have earned Icarus votes: first, they were HUGE — each one literally a half avocado and entire egg — so it’s a lot to ask of each guest to try when you just want one bite of every guac. Second, there were only a dozen of them (like a dozen eggs, I guess), but there were 90 RSVPs this year. These are rookie mistakes that I’m sure Audrey will self-correct in the coming years.

3rd place: “Brain on Guac” by Jaikar Beasley
Jaikar took the classic “This is your brain on drugs” PSA and showed us all what a brain scan looks like on guac. Funny! So why Icarus votes? Maybe it was the drug paraphernalia props (lines of cocaine, dime bag of pot, magic mushrooms, etc.) leading to a few parents having to awkwardly explain why mushrooms aren’t just a nutritious snack… or maybe it was the creepiness of scooping guac out of a man’s brain. But it raised awareness, and that’s what a good PSA does.

TOTAL NUMBER OF AVOCADOS SMASHED AND MASHED THIS YEAR:
195 3/4.
I think that’s the third highest since I’ve been keeping track! Someday you will all be tested on these stats.