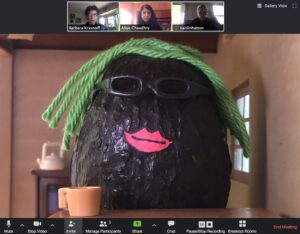 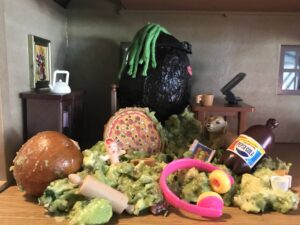 Well, I don’t know if you’ve heard, but there’s a global pandemic… so the difficult decision was made to not cram together and infect each other just so we could eat silly guacamole dioramas. Instead, the contest was moved online, which actually provided a delightful silver lining: we got a lot of entries from old friends who have since moved out of L.A., and otherwise wouldn’t be able to attend. I’m not saying I’m glad there’s a deadly disease ravaging our world, but this was a nice unexpected perk. Also, there was less far clean-up.

You can view the pictures (and videos!) here: https://photos.app.goo.gl/1nYwohuBx6ZWfpaw7

(I’ll eventually get them up on the GuacBowl.com photo page, for posterity, but I have to figure out how to get video files on here.)

In the first of many entries that took on current events, Kara’s guac was a two-parter that showed what Working From Home looks like on Zoom, versus all the crap we hide just off-screen. It really hit home for all of us stuck in videoconference meetings all week. If my math is correct, Kara started attending the party 15 years ago, and this is her FIRST win! Years of impressive guacs that were overshadowed by the flashier entries of her husband, perennial winner Brandon, Kara finally steps out of the darkness and snags the big prize for herself. All from the comfort of her home in Texas.

Maurissa and Travis’s entry was a nod to the Netflix limited series about chess and retro wigs. No rook-ies to impressive guacs, these grandmasters gave us another impressive endgame. The coolest feature was the chess pieces made of actual guac, frozen in molds. Maurissa commented that they probably would’ve melted in the California sunshine, but they survived long enough for a photo shoot in Connecticut where they’re living these days.

Brandon also used home-field advantage, in his case a backyard pool, where he staged a Viking Funeral. Complete with fire, oars, sail and a video with dramatic Norse music, it’s the type of entry that wouldn’t have been possible in years past… in the a fjord’ed space. There’d just be Norway to do it.

I decided to make an homage to everyone’s favorite pastime these days, sanitizing our hands. My “Clorguax wipes” and “Anti-guac-terial gel” were mostly just guacamole in different containers, but I did mix in some green Jello to get the proper goopy consistency for the hand sanitizer. Who was this for? Who actually tried it? Nobody. I’ve been stuck at home too long, I’ve gone crazy.

Second in Presentation, but first in Alternative! For obvious reasons, this year’s Alternative category couldn’t be judged based on taste, so it was more about the effort and creativity put into the entries. And it didn’t take stolen green-and-white pills for everyone to visualize on the ceiling why this chessboard was a winner. After these guys got the Icarus Award last year, this was an impressive checkmate from a seemingly losing position. (I am officially out of chess terms.)

Hunkering down on a remote family farm in Missouri isn’t just a pleasant way to spend a quarantine — it’s also useful for coming up with a clever Guac Bowl entry. Michael and Tiera’s entry was one of many video submissions this year — showing Tiera driving a giant tractor that fork-lifted guacamole right to a patiently waiting Zimmer. There was dramatic tension, there was soaring music, there were smiling faces, and finally, there was guac. Maybe I just really miss going to the movies, but I was nearly moved to tears.

The Viking ship didn’t have quite enough wind in its sails to reach victory. Maybe it could’ve used a Leif blower.

3rd place: (tie): “This Smells Like My Guagina Candle” by Aaron Pava

My brother’s entry was an ode to an infamous item sold on Gwyneth Paltrow’s “Goop” website. Maybe you’ve read about it: https://www.glamour.com/story/gwyneth-paltrow-story-behind-goop-vagina-candle. Like the original candle, this entry was controversial, risk-taking, and left a lingering funk over the proceedings.

I’ve already written about this, but like the name implies, you see more when you look at it from another angle. In the selfie Kara took with her entry, we can see the dollhouse she used to stage the scene — and it’s all the more impressive when you realize she had to shoot the “perception” photo through a tiny dollhouse door. As if Zoom lighting isn’t tricky enough.

A note on this category: usually, we do Best Tasting Traditional Guac, but since nobody could taste anyone else’s entries, I decided to change it up for this year and focus it on the title. Which is something people have been asking for for years. It made for a VERY tight race, only one vote separating each of the winners… with a tie in there too!

Angela has babies on the mind these days, so her entry was a little avocado-head newborn in a cradle, in a warm blanket of guac.

2nd place (tie): “This Smells Like My Guagina Candle” by Aaron Pava.

I hear this may have caused some friction at home. I don’t know if Aaron had to sleep on the couch after making this, but I hope it was worth it.

Tweenager Henry represents the young folks with this TicTok dance video entry! A perfect pun for an all-online contest this year.

This was the only runaway victory this year, earning nearly half the votes for Icarus. And it defines the category perfectly: the amount of work it must’ve taken Waynee to record a song, animate a video, and photoshop a lyric sheet… only to have many folks (myself included) stare in utter confusion. Is it a parody of a rap song that I’m too old/unhip to know? Is it an original creation? It is a satire of a meme? Honestly, I have no idea. Waynee works with teens, teaching them movie making, so maybe he’s more up on youth culture these days. In any case, I loved it, and I appreciate Waynee always going big with his swings!

2nd place: “This Smells like my Guagina Candle” by Aaron Pava

Goop, he did it again.

We only got 3 votes each, so really it was all about the ones above.

Really, it was the year of the video.

All in all, I’m so grateful to call you all my friends, and that we could keep up this dumb tradition, even in the craziest of years. I desperately look forward to seeing your faces in person next year!