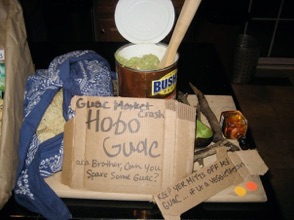 Josh wrote a nice recap of his Connecticut-based Guac Bowl for us, below. You can see photos from Guac Bowl East ’09 here.

This year’s third (and hopefully not last) Guac Bowl East was a surprisingly resounding success. We lost virtually every repeat player to graduation over the summer and still managed an even bigger crowd than in previous years. Like the Trojans I left behind in L.A., we don’t rebuild, we reload. It wasn’t just the “adult” population that grew. We had at least seven kids at the party and the eastern division’s first kid’s entry. I’d be tempted to suggest a new category for children if the entry hadn’t been so good; it actually did really well in the Best Presentation category.

Like the original Guac Bowl, our competition was colored by a theme or two. There were numerous recession-minded entries, one of which (Hobo Guac) ran away with the Best Presentation award. The economic meltdown also seemed to have unintended practical effects (on top of the intended artistic ones). Guacadile, which combined a novel Guava-mole recipe in the Best Alternative category, was partially filled in with an almost avocadoless traditional guac. Let me pause here to say that a mouthful of onions, tomatoes, and garlic paste does not actually taste very good without avocados. There were also two Guactopuses, one (mine and Alie’s) that garnered the Icarus Award, and another much cuter Casper-the-friendly octopus.

A few novel things about Guac Bowl East seem worth mentioning now that I’ve seen three of them: It’s now clear to me that we’ll ever be competitive with our western sister competition on the presentation front. The turnover in participants is too high for people to really settle in and spend a good year putting together insanely elaborate Guacontraptions. Most participants leave saying, “Oh my God, I had NO idea it was that intense until I saw it in person.” But that’s not all bad. Guac Bowl East offers a certain accessibility that maybe, just maybe has started to recede from L.A. People still show up believing they can win on a budget and on the fly. And, mostly, they can.

Another thing is that, because a lot of the participants here are dipping their toes into Guacmania for the first time, we’ve had to find ways to spruce up the party’s appeal to wallflowers. The 50 inch HDTV is nice, but lots of people have that these days. So, last year we enticed newcomers with exotic margaritas, like an amazing (or disgusting, depending on your tastes) passionfruit jalapeno concoction. This year, we merged parties with our neighborhood’s annual turkey fry. If guac isn’t your thing, watching a 25 pound whole bird slamdunked into a vat of boiling oil can’t fail to impress you. And man did it taste good.

But it all really comes back to the guac, doesn’t it? Cream cheese and bacon baby tomatoes, Guacupcakes, Guacaroni and Cheese… There’s some magic to avocados that drives people to creative excess I’ve not seen anywhere else. Perhaps it’s that there is a seemingly endless font of punworthy guacreations. Maybe it’s that avocado, with its soft texture and subtle flavor can be used, successfully, in just about any dish with any other ingredients. Whatever it is, I love it. And I hope, as I leave the East Coast, that Guac Bowl is here to stay. As the party wrapped up, two of my friends staying behind asked if they could carry on the tradition. And like a good lawyer in training, I told them that “with the right royalties, anything’s possible.”