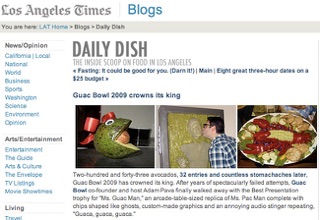 There was a nice follow-up article in the LA Times yesterday. I initially only saw the photo gallery they put up, but this piece goes into a little more detail.

Of course, the reporter, Elina, tried to stir up some controversy about “He’s No Guac To Me Dead” losing to “Ms. Guac-Man,” so I sent her this comment:

“What’s this about accusations, and a shadow clouding my victory?! I will gladly hand over the ballots and the ballot-tabulator Excel sheet for the LA Times to conduct their own investigation! I suppose the two impartial witnesses present during my tabulating wasn’t enough…? Let it be known, if the Times wants to hire Price Waterhouse Cooper to preside over the vote counting in the future, I will happily accept. Thank you.”

Elina wrote me back with the following:

“Well, you know how we muckrackers in the press are. We like to drum up controversy. Sells papers, starts wars. :)”

Sure, hide behind your smiley face emoticon, LA Times. We know you aren’t kidding.