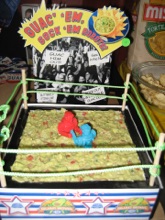 Oh, what a Guac Bowl it was. Every year, the entries get bigger, tastier, and crazier, and yesterday was no exception. Let me put it into context: usually, about half the entries are clearly aiming to win the “presentation” category, and the other half are tasty, but in regular ol’ bowls. This year, every guac but one had an interesting presentation element. And that one was no slouch: it was so good, it came in second place – losing by just one vote – in the Best Tasting Traditional Guac category. Basically, every guac was outstanding. For a list of winners, see last night’s post, below.

Before I continue, here’s what you’ve all been waiting for:

Now for some break-down of the action:

• 224.5 avocados were used to make the guac entries for Guac Bowl this year. That’s a new record (unofficial, since it’s the first year we counted.)

• The biggest story this year was probably the clash of three Barack Obama guacs! We had Greg and Michelle Steele’s “Guac Obama” (with life-size Omama cardboard cutout and buttons for people to wear); Chris Miller’s “BaGuack Obama” (with surprisingly accurate Obama caricature made from avocado skins); and Liana Maeby’s “BaGuac DoughBama” (an entire White House made of bread products). All three were unique and worthy of contention, but – like what happens so often in politics – they split the vote. Let this be a lesson to all Democrats as we go into tomorrow’s Presidential Primary.

• Speaking of similar entries, there were two guac-infused cookie entries this year. Matt and Marta Knudsen entered “Guackies” which were gingerbread cookies with an avocado-based icing; Matt Waynee entered “Sugar Guackies” which had the guac baked right into the dough. The Knudsens’ cookies placed third in Best Alternative Tasting, while Waynee’s cookies placed third for the Icarus Award. You be the judge of who won that battle.

• There were two entries that had people wearing their own guacs. Jim Sutherland dressed as Andy Samberg with a wrapped present strapped to his junk for his entry, “Dick In A Guac”; Brandon Oropallo smeared guac all over his face for his entry, “Five O’Guac Shadow.” Both made me want to vomit a little bit, in the best possible way. Nice work, gents.

• I attempted to put size over substance with my entry, “Guacweiler Beach.” It used 48 avocados, had a fire pit, and took up a big section of my driveway. Unfortunately, the combined elements of rain, wind blowing leaves and dirt into the guac, and a neighborhood cat reportedly walking through it, led it straight out of Best Presentation contention and into the loving arms of the Icarus Award. I couldn’t be prouder.

• Rob Saccenti’s “GuacAlien” was an obvious showstopper, eliciting gasps from the crowd as he carried it in. But there were so many other unsung entries this year that were overshadowed by either poor placement, late arrivals, or just the fact that there was a freakin’ fire pit of guac behind it. Here are some highlights: Marcy and Dominic Janes’ “Guacing the Picket Line” was an incredible tableau of the current labor strike, with veggies refusing to make guacamole, instead picketing the studio who “holds all the chips.” Besides this really strong concept, the details – flowers in front of the studio, hand-drawn t-shirts and signs – made this one really special. Peter Perigo’s “Avo-mikado” had a Japanese princess with the head made of a skinned avocado pit, the hair made of waxed and curved avocado skin, a dress made of onion skins, and fans made of multicolored corn chips. Stunning. Angela Park’s “Count Guacula” had two motorized elements: a push-button coffin that summoned the Count, and a remote-controlled mobile that made bats fly around. And she created a bunch of funny gravestones that talked smack about guacs of years past. And Angela’s really hot. Okay, now I’m just trying to get laid.

Thank you to everyone for another wonderful year. Stay tuned to the GuacBlog over the next couple days, as we dissect some of the entries up close, update you on the 2nd Annual East Coast Guac Bowl (the pictures are amazing), and maybe even have a little video segment…