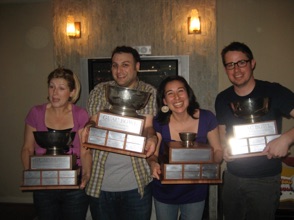 First of all, THE PICTURES ARE UP! Check them out by clicking here.

Now, without further ado, here is the rundown of winners:

3rd Place: “3 Pepper Guac” by Audrey Diehl.
I heard a number of people say “Huh, I didn’t expect it to be so spicy…” IT WAS CALLED THREE PEPPER GUAC, PEOPLE! Thrice the peppers, thrice the spice.

3rd Place: “Roadkill Guac,” by Adam Pava.
It had real gator and snake meat mixed in; This guac was inspired by my dad who gave me an awesome raccoon-shaped platter to make this.

2nd Place: “Guac Aioli,” by Kara Ulseth.
A fancy entry… and it came with its own Daily Candy write-up to prove it!

1st Place: “7% GBV,” a guac-infused beer brewed by Blake Lemons.
The name stands for 7% Guac By Volume… and it was seriously good, not just for a guac-beer, but for beer in general.

3rd Place: (tie): “Guaquin Phoenix” by Odessa Begay and Jordan Breindel.
Guaquin was drawn on plastic wrap, and the caption said “I quit Guac Bowl to become this wrapper.” Awesome picture and pun from first time entrants! I look forward to years of great entries from these two.

3rd place (tie): “Guac Swan” by Julie Lofrano and Gina Grad.
Like the Black Swan ballet itself, it was split into good and evil parts: a traditional guac, and an evil, black guac with black olives and black beans. Amazing idea and execution. But once again, Julie splits her votes by having both traditional and alternative in the same presentation, confusing voters who can only vote for one or the other… When will she learn to embrace the system??

2nd place: “Guacers Presents: Sweet & Spicy Guac Shots” by Christine Landry, Maggie Flynn, Nikki Giles, and Heather Murphy.
These lovely ladies dressed in matching skimpy Hooters girls outfits, and handed out tequila-guac shots. It was a valiant effort to win the boys’ votes with overt sex appeal… but Guac Bowl may be the only place where a bad movie pun can beat out the allure of hoochies and booze.

1st place: “Howard The Guac,” by Adam Pava.
Once again I take the crown with an outdated pop-culture reference! I don’t know if I should be proud or embarrassed that I was the only person who obsessed for weeks on my presentation, gluing feathers, molding clay for the beak, scouring thrift stores for just the right duck outfit, etc…

3rd place: “Meat the Guacers” by Brandon Oropallo.
This all-meat concoction included salami, chicken, beef, steak, hot dog, salmon, turkey, ham, bacon and sausage. Even the chips were pepperoni slices baked to a crisp. Voters admired the creativity and bravery to attempt this recipe, and double pun title, but the taste… less so.

2nd place: “Guacers Presents: Sweet & Spicy Guac Shots” by Christine Landry, Maggie Flynn, Nikki Giles and Heather Murphy.
Nobody can doubt the amount of effort that went into this entry: the matching outfits, the shaved legs, the gallons of tequila and avocados and spices that went into the shots… it had all the makings of a classic Icarus rise and fall. But there was one entry that outshone the Guacers in its sheer audacity and unpleasantness… and that entry is:

1st place: “Jellomole” by Angela Park.
The Jellomole took guacamole into a new category of foodstuffs heretofore unseen in competition: gelatin molds. The genius (and ultimately, hilarious failure) of this guac was, Angela didn’t just settle for making green jello and putting some avocados floating inside. No, she made real, full-on guacamole with enough gelatin to turn it into a wiggily, jiggily affront to God. With 30 votes, it was the runaway winner/loser for the Icarus Award.

Thanks, everyone, for another amazing year!