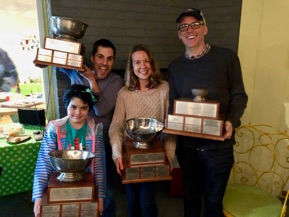 First, as always, check out the photos by clicking here.

The Super Bowl game might have been the dullest in history, but there’s no such thing as a dull Guac Bowl. A week of torrential downpour forced us to move the party inside, but that just made it more exciting. I think this was the first time in our 17 year history that it’s rained so much — sure, there was that time 11 years ago when light sprinkles fell on Guacweiler Beach in my driveway, and 5 years ago there was a brief shower that made us dash inside for a few minutes — but nothing like this. Still, nothing could dampen the spirits of those hearty partiers who dared leave their houses and deal with LA drivers in the rain… for they knew if they actually showed up, they’d have a better chance at winning! (There were only 18 entries this year, lowest since the early days. But they were all great! Speaking of…)

1st place: “Guacamochi” by Maggie Flynn & Ian Nyeste
After the last few years of battling Michael Zimmer for Best Alternative Guac, Maggie and Ian finally reclaim their crown! They last won four years ago, and 2008 before that. This time, they competed with “Guacamochi,” which is a great pun made even more impressive that it hasn’t been done before. Their mochi balls were stuffed with a guac ice cream that was equal parts sweet, savory, spicy, and kinda odd. Delicious!

2nd place (tie): “Guac and Tortilla Chip Ice Cream” by Justin Byrne & Liz Nico
There were two guac ice-cream entries this year, and they were in a tight race for the trophy. This one only lost to Guacamochi by 2 votes! A cold, hard defeat for Justin and Liz, who crafted a vanilla ice cream with chunks of avocado and a hint of tortilla chip flavor… all topped with cinnamon or Tajin seasoning (Mexican spices). They also made a brittle on the side, which I don’t think had anything to do with guacamole, so in retrospect that might have cost them those two crucial votes.

2nd place (tie): “Ssamguac” by Steve Tavernia
Tying in second place was Steve’s take on Korean Ssam dishes, which are wraps (usually in lettuce or thin crepes) filled with veggies, rice, and meat. Strangely, Steve’s wrapped weren’t wrapped, but they still had all the spices of a great Korean bite. He made two variations, one with short ribs and one vegetarian. But the greatest thing about this entry is, Steve always arrives super late to the party with a tasty entry after people already submit their ballots, but this time he actually showed up early enough to get votes!

3rd place: “Wicked Guac-some” by Tim & Danielle McKeon
Tim and Danielle tried to bring some Boston flavor to the party, by pouring a can of Boston Baked Beans on top of guac, and serving it with Cape Cod Potato Chips and Sam Adams Boston Lager. Needless to say, your love of this entry depended entirely on how much of a fan you are of baked beans, or New Englanders. Like the Patriots themselves, you either love ‘em or hate ‘em.

1st place: “The Guac Thickens” by Brandon Oropallo
Brandon has now taken this category five times, more than anyone else. Even moving to Dallas couldn’t stop him from flying in to snag the trophy out of my cold hands once again. This time, he made a conspiracy-board — you know, one of those things detectives in TV shows and movies have but don’t exist in real life, with push pins and yarn connecting to Polaroid pictures and newspaper clippings. The clues led to nothing, but were nods to lots of past Guac Bowl ideas and jokes. And the guacamole itself? It was actually “thickened” (like the plot) with secret ingredients… that he found in my kitchen. The real mystery is, what did we eat?

2nd place: “A Guac Mirror Event: BanderSnack” by Jordan Boeder & Amanda Lindemann
This entry was a reference to the great Netflix show Black Mirror, specifically their episode Bandersnatch, which was a “choose-your-own-adventure” where the audience got to make choices along the way. So naturally, the tasters were given a choice (“Rams or Patriots?”) that determined which guac to use as a base, then a series of other questions to determine which kind of chip (or cracker), and which toppings would end up on your unique bite. It was as thrilling and frightening as the best episodes of Black Mirror.

3rd place: “Alvy-cado Toast” by Adam & Angela Pava
We thought we’d pander to the crowd and use our 7-month-old baby, named Alvy, in our presentation. He’s so cute! How could you not vote for him?! Well, it turns out, babies don’t enjoy sitting still for a 5 hour party. In fact, Alvy would only sit in his specialty-designed Bumbo-seat-with-cardboard-cut-out-for-his-face for about 30 seconds before squirming and demanding out. So as a backup, I placed a photo of Alvy with the words “BABY ON BREAK” in his place. …Oh, also there was avocado toast.

1st place: “State of Guac” by the Levy/Friedman family, executive chef Rhonie Friedman
Sarah Kate Levy and Dave Friedman won this category 14 years ago, then disappeared to raise a giant clan of little Friedmans. Now those children have grown up, and the younger generation, led by Rhonie, have returned to take the trophy once won by their parents. This entry was actually three guacs of varying spiciness, from mild to shocking (hence the title). Young Rhonie earned a lot of votes by standing next to her guac the entire party, describing it to each person, and warning them of the spice level. It was adorable, and clearly a winning strategy.

2nd place: “Guacin’ Around” by Michael Zimmer and Teira Gunlock
Zimmer and Teira stayed true to their theory that the way to win is to interact with every voter, which has paid off many times in the past — but not this year. This time, he strapped a tray over his neck filled with all the ingredients, and wandered the party to offer everyone his guac, mixing it in a molcajete right before their eyes. Part cigarette girl, part Mexican restaurant waiter who makes table-side guac, it was a fun idea. So why didn’t it win? One theory: two of the shorter partiers (who shall remain nameless) lamented to me that Zimmer is such a tall, hulking giant of a man, that they couldn’t see what was going on up on that tray.

3rd place (tie): “White On Green, by Guac Rothko” by Lauren Edson and Dave Allen
Some people make entries based on TV shows, or pop-culture celebrity puns. Not Dave and Lauren. They made a guac referencing the 1930s Abstract Expressionist painter Mark Rothko, and designed a guacamole to look like a painting from his late-period “multiforms” consisting of rectangular fields of color. For a crowd like this, it was suicide. (Rothko fans will get that.)

3rd place (tie): “Traditional #9” by Justin Byrne & Liz Nico
Three years ago, Justin and Liz showed up for the first time, holding a guac with no name, and it was dubbed Traditional #9 because that was the sticker number it received. That guac won first place. Last year, they returned with another Traditional #9, and it got second place. This year, they requested the same sticker number, and Traditional #9 slipped into third place. Sure, it’s not an upward trend, but they also make an Alternative entry every year that places, so it’s pretty impressive.

1st place: “Wicked Guac-some” by Tim & Danielle McKeon
It’s rare that a guac places in both best-tasting and the Icarus Award. But this really was a divisive guac. Some people believe it got Icarus votes because people hate New England, but no… I think it’s because Tim poured a bunch of disgusting baked beans on top of otherwise unsullied guacamole. (To be fair, there really weren’t any Icarus Award “deserving” entries this year — there were none that tried so hard that it caused them to fail. On the contrary, this entry didn’t need to try very hard to fail.)

2nd place: “Guactemala” by Albert Payano and Shakira
I thought this one was good! I don’t know where the Icarus votes come from. It was perfectly innocent: a Guatemalan inspired guac, with pineapple mixed in, served on plantain chips instead of tortilla chips. It even has a pun title that rolls off the tongue. I don’t know. People needed something to vote for, I guess.

3nd place: “Guacamochi” by Maggie Flynn and Ian Nyeste
Discussed above, where it WON ALTERNATIVE! I guess some people don’t like delicious things.

NUMBER OF AVOCADOS USED THIS YEAR:
144. Weirdly, only 1.5 off from two years ago, when there were a lot more entries. Huh.

Thanks for another guacsome year, everyone! Hopefully I won’t be as tired next year! (Babies get easier as they age, right? What’s the phrase? The “terrific twos”?)