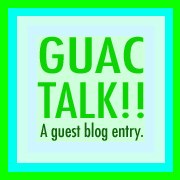 Here’s another Guac Talk!! for you. Today’s guest bloggers are Josh and Alie Lee, friends of mine who moved to Connecticut a year and a half ago, and decided to host their own Guac Bowl East. It was the first of the Official Guac Bowl Spin-Offs — though as you will read in the first paragraph, it was not originally intended to be so official. In any case, we all hope a generation of guacamole lovers will be inspired to follow Josh and Alie’s lead and host their own Guac Bowls.

So this is the second year of Guac Bowl East. I have to say I’m the tiniest bit miffed by Adam’s open encouragement of what I thought was a misappropriation of his now-legendary guacamole competition. His approval has taken some of the luster off my bad-boy image (and also opened a treasure trove of theft-worthy presentation ideas we could have claimed as our own for years to come). Apologies to whoever created Tequila Guacingbird: yeah, we stole your idea, did it worse than you, and forgot to mention it wasn’t an original creation. That’ll teach you not to copyright!

We hosted our own Guac Bowl last year in part because of a thoroughly unmemorable Super Bowl (I think Prince performed, but I have no idea who played the game). But also, we needed a quick way to meet replacement friends in our first year away from LA. Turns out Guac Bowl is a great idea to steal, especially for a get-to-know-folks party. It’s got cross-gender appeal: generally guys who don’t feel like exercising their culinary instincts are happy to come for 50 inches of hi-def football. Similarly generally, gals whose enjoyment of football stops at “those hot tight pants the players wear” are often happy to come put their guactastic creations on display. These lines blur over time, of course (witness Pava Bear’s current mix of winners). But, this is how the first two East Coast Guac Bowls have shaken out.

There’s also always a small cadre of people who won’t commit to either camp: they don’t care about the big game and are also too lazy to mix up a bowl of pureed avocado. For them, we introduced (and are expanding on) specialty margaritas (like true hacks, we stole a great recipe for passionfruit-jalapeno margaritas from a Navajo restaurant in New Haven for this year’s Bowl). Who knows . . . this might become a new category for judging.

This brings up another aspect of Guac Bowl’s easy appeal: customization. Last year we mimicked the four-category set-up of the classic Pavalian Guac Bowl; but this year, we’re sorely tempted to force everyone into the punny presentation category. And, as noted above, we’ve planted the seeds of a margarita category as well. The point is, guac only has to be an organizing principle. It doesn’t constrain what you do to make your party a hit. The formula, like Rogain, seems to work. From our humble 15-entrant competition last year, we’re up to the entire Yale pediatrics nursing program and half the law school’s class of ’09.

As a testament to Guac Bowl’s viral appeal, the winner of last year’s presentation award is taking the idea to Seattle for ’09. Soon Guac Bowl will metastasize to the rest of the US. That’s Adam’s goal anyway. Mine, while I’m still a Connecticut resident, is to elevate Guac Bowl East to its proper stature vis a vis Guac Bowl West. Like fashion, finance, and cuisine, it seems only fitting that we effete elite northeasterners take Adam’s idea, recreate it more expensively, with less fun and then boast about how much better it is than whatever they do in California.