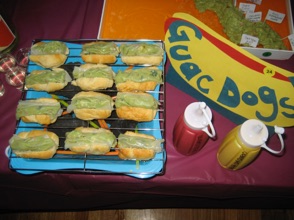 Guac Bowl is this weekend! And there are a crapload of people on the Evite! It’s gonna be a big one.

For all you newcomers, I thought I’d quickly run down the categories you can enter in, in case you were too lazy to click on that little avocado above.

As always, the trophies will be awarded for:

And just a head’s up: the game isn’t until 3, but the party starts at 1. Get there early if you want prime placement for your guac, because table space fills up fast. The more people who have a chance to see yours and eat it, the more votes you might get! (I always feel bad for people who show up with awesome guacs right before the game, and everyone misses all the amazing work they put into it.)