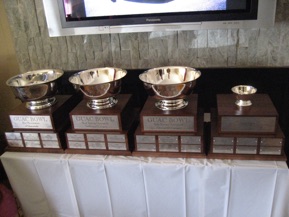 Every year, the liberal Guac Bowl elite hound me with the same questions: why aren’t there more categories? Is it really fair that something like Guac Ice Cream — which is probably 5% actual guac, 95% ice cream — competes in the same category as actual guacs? Isn’t it an affront to hard-working guacs everywhere that something like GuacAlien — erected mostly out of veggies, not guac — can win best presentation? How can you compare apples and oranges? (By the way, we’ve had both apple guac and blood-orange guac.)

My answer is always the same: let it go.

Here’s why. This is a democratic society. You people are smart. If you don’t think guac cookies have enough guacamole in them to count in the taste category, don’t vote for them. If you don’t think Guactanamo Bay has enough guac in it’s giant tableau to count in the presentation category, don’t vote for it. The system works! You control the results!

Okay, sure it would be simple for me to add more trophies for “Best Non-Guac,” or “Guac Rookie of the Year,” or “Best Presentation By A Female Contestant” (all real suggestions, by the way)… but wouldn’t that diminish the value of the actual trophies? I added the Icarus Award a few years ago to take care of all wildcards. Are you people never satisfied? I know it’s the most important competition event of our generation, but it’s also just a party.

So it’s up to you, America. When you vote this February 1st, vote smart, vote with your heart, but most importantly, vote with a political agenda. As long as that’s all one vote.