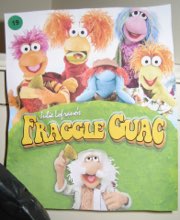 So what makes a good guac name? Well, there are a few components.

1. A good pun. Thankfully, there are a million rhymes for “gauc,” and a million movie/TV show/song/book titles with those rhymes in them. So plug one in, and boom, you got yourself an instant entry. Let’s try it out together. What rhymes with guac? Walk, Sock, Talk… Talk, that’s a good one. What’s a TV show with the word “talk”? “Talk Soup” on E! Blammo. “Guac Soup.” You just came up with a Joel McHale-themed entry. Plus, if you get lucky like that, where the title lends itself to a good Alternative Guac style (soup), you can go that route. If you got the balls and the blender to pull it off. Hmm, that was actually a pretty good one – maybe I shouldn’t have given it away.

2. The name card or sign. There’s no sense in having a great name if people don’t know what it is. This is a common rookie mistake. Don’t be that guy that has to borrow a Post-It or napkin to scrawl your name on at the party. Make yourself a sign ahead of time. Use PhotoShop if you got the skillz, or get your artsy cubiclemate to draw something. Last year, Christine had a great “Guac Paper Scissors” entry, but the slower partygoers didn’t know what it was until she borrowed a pen and spelled it out for them. I’m not saying my friends are idiots who can’t get a visual pun… it’s just overwhelming with 60 guacs, and sometimes they can use a little visual aide.

3. Is it better to be topical or retro? Well, that’s between you and your guac, but sometimes being topical runs the risk of competing against other people who had the same idea. In 2007, there were two Guactanamo Bays. In 2008, three Baguac Obamas. And last year, two Slumguac Millionaires. But, I remind you, there was only one Fraggle Guac. So it’s worth asking yourself if your hilarious topical pun is so great that only you could come up with it, or risk having direct competition. But what’s guacamole without risk? Just a boring party, that’s what.