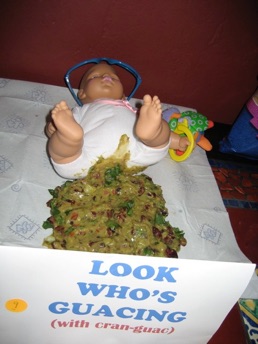 Today, we are totally psyched and honored to be Entertainment Weekly’s Site of the Day on their PopWatch blog! Because of all the new traffic, I thought it would be a good idea to let you know exactly what Guac Bowl is:

There you go! You can click on the avocado above to get a more detailed history. Or, if you’ve only got a minute, you should probably just check out all the crazy awesome pictures, using the links on the left. Start with Best Presentation, then The Icarus Award, for the most visually-interesting ones. (Or, obviously, Best Tasting for the most gustatorily-interesting ones, though that’s hard to convey through photography.)

My only goal in life is to turn Guac Bowl into a national holiday. I will not rest until every town in America hosts their own Guac Bowl on Super Bowl Sunday. You should host one yourself. Seriously. It’s really easy. Here’s how:

Invite your friends over, telling them each to bring their best guacamole. But not just for how it tastes (though that doesn’t hurt). There are multiple categories they can enter:

Sounds fun, right? Here, I even made a ballot box for you to print out. All you have to do is cut it up, and clean your apartment (don’t forget the bathroom; people judge)… and you’re ready to host a Guac Bowl!

If you do host one, make sure to report back here with pictures and stories. I’ll post them for all the world to see.