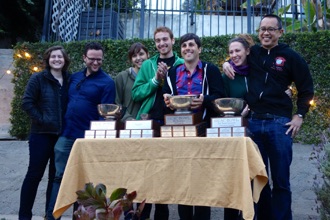 Neither rain, nor drizzle, nor mist, nor other words that mean a light moisture in the air, could keep Guac Bowl 2014 from being a success! While we may have had to cover the outdoor TV with a tarp for a bit, the partiers kept on guac’ing under the canopy and inside the house.

And now, the WINNERS:

Brandon’s Mexican-folk-art inspired shrine to the avocado must have worked its voodoo magic, because it won in a landslide. Perhaps the most obsessively detailed guac presentation ever, every nook and cranny of this alter was covered in photos, artwork, candles, and other Dia De Los Muertos-style doodads. Truly a work of art. And let’s not overlook that it also was really tasty (winning 2nd place in the Alternative Tasting category as well), for the Bloody Mary-style shots infused with avocado that lined the shelves of the shrine. Brandon’s dead ancestors should be proud (but are probably just confused).

I was inspired by the AMC zombie drama, and also by the fact that nobody had ever done this pun which has been staring us all in the face for years. My zombie was based on this classic image from the show: http://tinyurl.com/WDguac. I made him by wrapping a toy skeleton with plastic drop cloth, then shrink-wrapping it with a heat gun to create the skin. Then painting. And adding entrails. Maybe I over-did it on the entrails.

Rob went for a truly interactive experience this year, creating a complete treasure hunt, with clues hidden around the yard and house. A pirate poem explained the quest and sent treasure hunters to such exotic locations as the fridge (“when light it is opened, when dark it is closed/ it runs all of the time, yet nowhere it goes!”); a hollowed-out lemon on the lemon tree; a message on an LP cover at my record player… and finally under a pile of firewood, where hunters found a wooden chest filled with priceless pirate loot (guac!). Unique, intricate, and well-planned.

An interesting note: all three of the top presentations were death-related: a shrine, a zombie, and a dead pirate’s hidden treasure. Coincidence? Or an ominous, subconscious sign that we are all concerned about our mortality? (Nah, I’m going with coincidence.)

Christine becomes a six-time winner with this entry, tying me for most wins all time (though mine are mostly for the Icarus Award while hers are for things that, you know, taste good). This year, Christine and her husband Robert made a surprisingly-not-disgusting fondue consisting of guac and, according to the chef, “a ton of cheese and butter, and a fair bit of cream” (so maybe it’s NOT surprising it tasted good). Robert’s acceptance speech: “I chopped the veggies.”

Not only did it win Best Presentation, but this alter tasted good too! Lining the shrine were votive holders-turned-shot glasses filled with a guac/vodka concoction that was reminiscent of Bloody Marys. Just like all great shrines, it got you drunk.

In a shocking turn of events, this was one of two Sriracha hot sauce-based entries this year! As Vy and Blake were walking up the driveway, they saw fellow competitor Jim Sutherland was holding Sriracha and wearing a Sriracha shirt… which could only mean that great minds think alike. (Maybe it’s because Sriracha is in the news lately, with the factory facing being shutdown for it’s offensive odors.) In any case, Vy and Blake’s entry garnered more votes, because it included delicious empanadas filled with Mexican ingredients, which paired well with their guac-and-Sriracha sauce in the iconic bottles.

1st place: “Take A Guac On The Wild Side” by Mark Heyman Diana Fithian.

It’s been a big week for Mark. First, a movie he wrote premieres at Sundance, and sells in a huge bidding war. Then he wins the Sundance award for Best Screenplay. Then, in what can only be described as the most rewarding event of them all, he wins Guac Bowl! If that’s not impressive enough, it’s the first year he and his wife Diana entered. Still, he claims he is no guac newbie, having honed and perfected this recipe over many years (though he added habanero this time to “justify the pun.”)

Angela was so close to victory — tied for it, in fact, when we first tallied the votes in the back room. That’s when my vote-counting assistant, Matt, declared “well, I haven’t voted!” In a rushed decision — the kind which entire dynasties are decided upon — I told Matt to run out and try the top two vote-getters (without telling him who made them). He returned, and the vote didn’t go in Angela’s favor (though Matt added later: “If I had known it was Angela, I would’ve voted for her!”… Ah, politics and corruption.) Anyway, all the ingredients of Angela’s entry were smoked over hickory, then mixed with fresh avocado, to create a deep, smokey, but otherwise traditional, guac. It was served atop a mini-BBQ with hickory burning below to add even more smokey aroma.

A solid, traditional guac with a name that implies there was something sneaky going on. I asked Corey and he said “it had some habanero in it, and if you ate a bunch, it would sneak up on you. We learned this in the testing phase.” Ha.

1st place: “The Wolf of Guac Street” by Jordan Boeder and Amanda Lindemann.

This entry was inspired by the expired Lemon Quaaludes that effed up Leonardo DiCaprio and Jonah Hill in “The Wolf of Wall Street.” And they basically had a similar affect on our crowd. Jordan and Amanda stuffed guac into fillable gel capsules, creating pills that were not so easily chewed. You basically had to swallow them with a swig of beer without tasting the guac, or you’d be running to a garbage can like Leo crawling to his Lamborghini Countach. Truly deserving of the Icarus Award! Great idea, practically inedible.

It’s not that Michael and Tiera’s entry itself was bad; the mix of guac and “farm fresh eggs” to make an egg salad was inspired. No, rather, it was the presentation — Michael dressed up in a giant chicken costume and Tiera dressed in overalls as the farmer handing out the eggs — that made people think Icarus. It was like Icarus himself was at the party, if Icarus was a giant 6-foot-6 chicken man, soaring towards the sun. Or maybe it was the fact that we kept finding little wisps of yellow chicken-fur in the other guacs and food that grossed people out.

In a Guac Bowl first, a contestant entered the SAME GUAC not once, not twice, but THREE times in three consecutive years! Robin was overheard saying, “I like it, and I’ll keep entering it until it wins!” If that’s not the self-confidence of Icarus himself, I don’t know what is.

Thanks to everyone who came, despite the drizzle! You all guac hard.