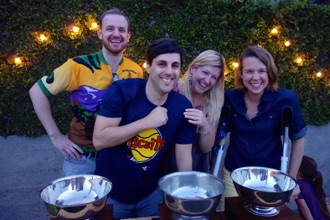 First, as always, check out the photos by clicking here.

Just like this year’s SuperBowl, the GuacBowl had its share of exciting action, great comebacks, heartbreak, veteran leaders, rookie sensations, and brawls. (Okay, no brawls.) It was a year of repeat winners… and one exciting new loser.  But no matter who won the game, as always, the guacamole wins.

Let’s get right to it:

1st place: “Funnel Guac” by Brandon Oropallo
Brandon defends his crown! Our first ever back-to-back champion in the Best Presentation category, Brandon wins his fourth trophy — including three out of the last four years for Presentation — becoming an indisputable one-man dynasty of guacamole design. This year, “Funnel Guac” was a classic carnival-inspired masterpiece, holding fried guacamole funnel cake inside it. From the hand-painted canvas stripes, to the mismatched antiqued bulbs, to the stuffed animal prizes hanging off the side, this entry was unquestionably the largest. (And the best.)

2nd place: “Guacket Jets” by Adam Pava
Losing by two measly votes, my entry this year was inspired by the classic “Rocket Jets” ride in Disneyland’s Tomorrowland. While the guac-filled rockets themselves (made from spray-painted soda bottles, construction paper, and tons of glitter glue) might look like they were constructed by elementary school children during Arts and Crafts time, it was the motorized movement of the entry that made it unique. Built on a rotating stand, the jets flew by at rocket speed (actually, pretty slowly), for you to swoop your chip into the guac before it zoomed by.

3rd place: “I Am Guac” by Matt and Maurissa O’Connell
Inspired by everyone’s favorite monosyllabic tree man from “Guardians of the Galaxy,” Matt and Maurissa (calling themselves Guacket Raccoon and Guac Lord), utilized state of the art 3D-printed cookie-cutter technology to make baby Groot tortilla chips planted into each tiny pot of guac. Charming and surprisingly well executed, like the movie itself.

1st place: “Guacamole Jam” by Maggie Flynn and Ian Nyeste
More repeat winners! Though it had been 7 years since they last took home the trophy (also for Best Alternative, for their fried guac ravioli), year after year, Maggie and Ian always bring the goods. And that tenacity finally paid off with another winning entry, this year for Guacamole Jam — a canned guac with all the traditional ingredients, with sugar and pectin to turn it into preserves. Served atop homemade cornbread muffins and honey butter (yum), it was surprisingly delicious. And because Maggie can’t resist a good music theme, the name inspired a presentation of a record album of famous jamming musicians. Everyone who tried it was super jelly.

2nd place: “Guac Wonderful” by Shawn and Farrah Gauthier
Newcomers to the party, Shawn and Farrah made a classic rookie mistake: showing up slightly too late, meaning their awesome guac wasn’t sampled by everyone. It cost them precious votes — they lost by only two! — leaving them to wonder what would’ve happened if they arrived half an hour earlier instead of putting the finishing touches on their presentation. A classic Guac Bowl conundrum. Still, give props to the newbies for coming up with an original idea (pomegranate guac) that tasted amazing, with a nice display as well. I’m looking forward to future entries from these two.

3rd place: “Funnel Guac” by Brandon Oropallo
I’ve already written about this winning presentation above, but now to cover the taste: as a guacamole funnel cake, it was… surprisingly not terrible! In fact, it was pretty good — sort of like an avocado tempura. As one guest said, “you really can’t go wrong with fried food when everyone is drinking.” Some sore losers claimed they didn’t taste the guacamole in it at all, but my guess is that some pieces had more avocado than others. Or like most games at the carnival, it was rigged.

1st place: “Alie Is Awesome Guac” by Alie Lee, with help from Rowan Lee
Our third repeat winner! Four years ago, Alie won the traditional category with the help of her then four-year-old son, Leithen. This year, she wins with the help from her six-year-old daughter, Rowan. Honestly, I think it was all a long con to get both of her kids admitted into the Winner’s Lounge, where the whole family can enjoy spending quality time together. Like last time, Alie’s guac was a no-name, no-theme entry, benefitting from no flashy distractions (other than her constant campaigning to get everyone to vote for her). It’s a winning strategy! Presidents have been elected this way.

2nd place (tie): Hans “Mole” Man by Julie Halton
Julie’s entries are almost always inspired by pop culture (“30 Guac,” “Lady GuacGuac,” TuGuac Shakur,” etc.), and she once again came through with a hilarious reference… this time, to the Hans Moleman character on The Simpsons. Decked out with coke-bottle glasses, a cane, and a tie, this guac suffered a similar fate to its animated counterpart… crashing and burning in competition.

2nd place (tie): “Guac. It. Out.” by Teira Gunlock
Sometimes, a traditional guac needs nothing but a classic taste, and classic TV show inspiration. In this case, Teira’s “Guac. It. Out.” referenced Uncle Joey’s catch phrase from Full House (“Cut it out”). And like Dave Coulier himself, this guac was nice and friendly, but surrounded by bigger stars — the Sagets and Stamoses of the guacamole world.

3rd Place: “Steven Guacing’s The Theory of Guacamole and A Brief History of Guac” by Julie Lofrano
This Steven Hawking-inspired guac included two photoshopped book covers, an avocado wearing horn-rimmed glasses sitting in a wheelchair, and the deconstructed elements of guacamole with the classic “avocado pit with toothpics” science experiment. And it got more votes for flavor than presentation. That’s GuacBowl for ya.

1st place: “Sockamole” by Andy Bean
Our only 1st place “winner” this year who wasn’t a repeat champion is Andy Bean, who stuffed an old sock with guac and called it Sockamole. “Winner” is in quotes because, of course, this is the Icarus Award I’m referring to — our Best Loser trophy. Though I would argue that the Icarus Award should go to the entry that tries the hardest only to fall the furthest, as its namesake suggests, clearly many of our voters aren’t up on their Greek mythology. Did this entry try to win, or was it always aiming for de-feet? Still, there weren’t a lot of disgusting guacs to choose from this year, so Andy’s sock was a shoe-in. So to speak.

2nd place (tie): “CoffeeMole” by Jim Sutherland
Both of the entries that tied for second place in the Icarus Award this year tried to take guac and mix it with something else delicious, only to come up with something arguably worse. Jim’s entry took the hipster-chic Trystero Coffee cold brew (roasted and sold out of a garage in Atwater Village), mixed it with guac, and displayed the unholy creation in a French Press. I’ll say this: it could’ve been a latte worse.

2nd place (tie):“Guac-kimchi-mole” by Angela Pava
Angela, my beautiful and patient wife who puts up with this party every year, decided to harken back to her paternal roots and make a kimchi-infused guac. It was served Korean-dinner-style with banchans (small dishes of appetizers) — in this case, various Korean chips to use for dipping into the guac-and-kimchi mixture. The result? I love kimchi. I love guac. I love my wife. I abstain from commenting.

3rd place: “Hector Sala-Mango” by Blake Lemons and Vy Trinh
This dish, inspired by the drug-running invalid Hector Salamanca on the TV show Breaking Bad, was actually confusing to many tasters. The name made it seem like it would be filled with mango, but in fact, it also contained salmon — a great double pun, but it caused a bit of a shock when tasted. The end results were not dissimilar to Tio’s own demise: a stroke, a call for help, and an untimely death. (*Nobody actually died eating this.)

Thanks for another amazing year to everyone who entered, everyone who came, and everyone who just likes reading about it afterwards!  I’m reminded every year how imaginative my friends are.