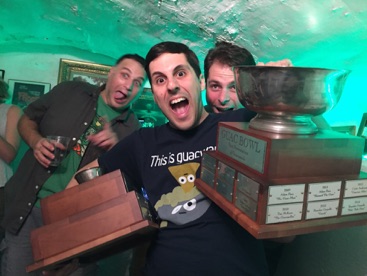 First, what you’ve been waiting for — the photos: click here.

1st place: “Guacbuster Video” by Brandon Oropallo
Brandon three-peats! The first ever hat-trick in Guac Bowl history, Brandon has defended his Best Presentation trophy with this year’s masterpiece, “Guacbuster Video.” The entry was an homage to a bygone age before Netflix, when we used to visit the store to pick out a DVD and… eat little plastic bowls of guacamole attached to them? Who knows. It was a great pun. Actually, it was thirty-three great puns, since each one of the DVD covers had a guac-based title — like, The Guacy Horror Picture Show, Love Guacually, and my favorite, The Avocadoeater (instead of The Aviator). It was an amazing accomplishment, especially in an era when everybody thinks “all the good puns have been used already.” NEVER!

2nd place: “Guacbusters vs. The Stay Puft Marshmole Man” by Adam Pava
Also three years in a row, I’ve come in second place to Brandon. Are we this generation’s Larry Bird and Magic Johnson? Agassi and Sampras? Brady and Manning? Or just two idiots who dedicate way too much time to making dumb guac statues every February? My losing entry was a 3-foot tall Stay Puft Marshmallow Man, with limbs made of avocados and a body made of fake marshmallow (actually carved foam insulation). The guac itself included real marshmallow fluff, making it an ooey-gooey, super-sweet dip that most people hated and a few people inexplicably enjoyed. For inspiration, “I tried to think of the most harmless thing. Something I loved from my childhood. Something that could never ever possibly destroy us… Mr. Stay Puft!”

3rd place: “Oysters Guacafeller” by Angela Pava
Oysters are all the rage these days, which inspired Angela to create an unholy mix of guacamole and oysters on a half-shell. While seafood sitting in the sun all day might not have been the most tempting idea in execution, no one can deny the “Oyster Shack” visual design of her entry was super adorable. Served with three traditional oyster toppings (horseradish, shallots and cocktail sauce) and garnished with cilantro and lemon on a bed of ice, it had all the marks of a classy dish, and the fishing net and wooden sign made it look like an authentic seafood shack.

1st place: “Wok-amole” my Michael Zimmer
Take one great pun that’s never been used before, toss your veggies into a wok, mix in a dash of soy sauce, and garnish with one tall drink of water wearing a chef’s hat. That was the recipe for the winning Best Alternative Guac this year. The Beni-Hana-style presentation of flipping salt and pepper shakers in the air would have been enough, but Zimmer actually made a surprisingly tasty stir-fry. And the fact that it included all the traditional ingredients of guac (with panko-breaded avocado) and still managed to transform it into a non-dip dish makes it truly deserving. Previously a winner only in the Icarus category, Zimmer finally earns himself a big trophy!

2nd place: “Ice Guax Pies” by Maurissa Horwitz
After taking home the Best Alternative Guac three years ago with Tater Guacs, Maurissa almost grabs the gold again with this year’s entry, Ice Guax Pies. A take on the classic “Icebox pie,” this entry was a tangy, cold mini-pie with a graham cracker crust and lime-avocado filling. Perfect for a scorching hot Sunday in Los Angeles! She had some stiff competition with another avocado-pie entry, by her good friend Mary Traester’s avocado cheesecake. Friendships have been destroyed by less.

3rd place: “Pimento Cheese Guacamole” by Rob Saccenti
Perennial favorite in the Presentation category (with past glories including a Guacket Launcher, a pirate treasure hunt, and the famous Han-Solo-in-Carbonite entry that will never be topped), this year Rob decided to put his considerable talents into the Alternative Guac category. His pimento cheese guacamole was fit for a true Southern belle, served with both tortilla chips and cracklins, and presented inside mason jars. Why I do declare, it just might give ya the vapors.

1st place: “Bloody Good Guac” by Josh Lee, with help from Leithen Lee
The last time Leithen won, he was 4 years old. Now a ripe old man of 9, he has truly come of age as a Guac Bowl child, learning and honing his skills every year like a batboy in the major leagues. Or maybe his dad Josh Lee made this entry, and Leithen just took the glory. Either way, it was another victory for the Lee family, who have made a living on un-themed traditional guacs over the years. Despite its name, this one had no actual blood or blood orange or anything bloody in the guac; rather as Josh explains: “we tasted it, and the first thing we thought is, that is some bloody good guac!” Indeed.

2nd place: “Guacadile Dundee” by Julie Lofrano
Julie made no qualms about it yesterday, she really, really wanted to win after placing many times but always coming up short. Alas, she came up just three votes shy with this one. “Guacadile Dundee” was another great pun that had shockingly never been used before, but Julie made the same fatal mistake as her 2010 Golden Girls-themed entry, where she confused voters by having multiple guacs in one entry. This time, there was a regular guac, and a second one that included vegemite — a funny idea for the Down Under theme, but maybe too much of a thinker for the average American voter. Still, Julie always brings it with the visual details, with this entry including the classic Dundee mugger scene: “That’s not an avocado. THAT’S an avocado!”

3rd place: “Blighty Guacamole” by Caroline McFarlane-Watts
Our British friend with the most British-sounding name in the world made a guac that fit her heritage, Blighty Guacamole. “This is how my mum makes it back home” she explained, “though people here might not like it.” Oh, the people liked it, enough to win her third place. Made with vinegar and spring onions, it was more tangy than the Mexican/Californian style we’re used to, but it was, as the Brits might say, “smashing scrummy luvvly-jubbly collywoggles!” (NOTE: I have no idea how British people talk, this is gibberish.)

1st place: “Guacbuster Video” by Brandon Oropallo
Now THIS was a first: never before has the winner for Best Presentation ALSO won the Icarus Award booby prize, for the greatest failure. But it made sense here — this entry was both amazing AND a disaster. Not moments after he finished assembling the monstrosity, did DVDs and cups of guacamole begin falling off, onto the floor. Every few minutes, there’d be another clatter or splatter. The “Guacbuster Video” sign itself literally fell off one second after I took the picture of Brandon in front of it. So enjoy your two trophies, Brandon, you’re the best. And the worst.

2nd place (tie): “Oysters Guacafeller” by Angela Pava
Is this really a surprise? They were oysters, sitting in the sun all day, in the sweltering 80-degree heat. And let me add, as an “insider” to the process: as my wife prepped this clammy entry, our house smelled like briny barnacles, to the point where I thought it was going to linger and ruin the party. I will give Angela credit though: she boiled and scrubbed and dish-washered the shells so many times, for fear that she’d make everyone sick. So there’s the silver lining: nobody died!

2nd place (tie): “Guacbusters vs the Stay Puft Marshmole Man” by me.
Just because I mixed two tubs of marshmallow fluff into guac, and we all watched in horror as it slowly, slowly oozed back to the top of the dish over the course of the day? It’s called art, people.

3rd place: “Guacadile Dundee” by Julie Lofrano.
Honestly, I don’t know why this got any Icarus votes. It was tasty, and had great design. Maybe people are disgusted by vegemite?

Every year, without fail, a few new trends emerge from nowhere, to create similar competing guacs. This year, there are a few worth mentioning:

The most obvious trend: FRIED AVOCADOS. Did deep-fryers suddenly become super affordable, so everyone got one for Christmas? I don’t know, but there were no less than four entries that had breaded/fried guac (five, if you count Zimmer’s winning “Wok-amole”). Each one was unique and delicious, and worthy of mention, but as a whole, they ended up cancelling each other out: First, Sean Cole’s “Hush Guacies” were a take on hush puppies, served with not one but two dipping sauces. Second, Albert Payano and his friend Anil’s “Desi-Guac” was an Indian-themed fried ball served with choice of two chutneys. Jordan Boeder and Amanda Lindemann’s “End of Seguacgation” was technically baked not fried, but had the same basic idea of crispy-breaded-dipping-pieces, theirs with salsa. And finally, Jim Sutherland arrived late with his “Deep Fried Guac,” and upon seeing the competition was apparently so fed up that he re-named his entry simply “Whatever.” Ha.

Another theme: TONS OF TEXT. Was this a party, or a history class? Two entries stand out in this regard: Chris Carter’s “Guacco and Bruschetti” was a parody of Sacco and Vanzetti, the sort-of-famous Italian immigrants who got the electric chair in 1927… and the poster art for this entry seemingly gave us the entire Wikipedia page on them! Seriously, like, four paragraphs. Similarly, the previously-mentioned “End of Seguacgation” by Jordan and Amanda was a posterboard filled with altered historical documents — newspaper clippings, notecards, photos with heads replaced by tomatoes and avocados… even an entire speech by Martin Luther King (“I have a dream… a dream of a Super Bowl with multiple dipping sauces… where all vegetables are created equal…” etc.)  I applaud both these entries. It’s a bold move, trying to teach drunken partygoers.

Another trend: HILARIOUS ALMOST-RACISM! See Jordan and Amanda’s entry above, and Maggie and Ian’s “Miso Guacy” entry. In a year filled with racial tension across college campuses nationwide, these guacamoles totally could’ve sparked a student protest and maybe the resignation of a dean or professor. I’m glad my back yard is a safe space.

An honorable mention goes to Shayna Maskell, who returned to Guac Bowl after many years on the East Coast, keeping the tradition alive there. Her “Guaffles” (guac waffles) entry came with THREE sides to put on them, each one including an ingredient or two of guac: cilantro and lime compound butter, tomato marmalade, and jalapeno-infused syrup. Glad to have you back on the best coast!

Other mentions go to: Jared Mazzaschi and Hillary Hattenbach, who didn’t realize the craziness of the entries until they checked guacbowl.com on the day of the party — and STILL managed to rally and put together a great first-time entry: the Lou Reed-inspired “Take A Guac On The Wild Side.”… The Little family, who dressed up each family member as an ingredient of guac, despite the kids’ protests… The Brombachs who juggled two kids and still made cute looking “turtles” out of their great grandma’s avocados and pretzel sticks… and the Desowitzes, who bucked choco-guac tradition to try something new, a chicken-salad guac!

170 avocados were harmed in the making of this Guac Bowl. Way up from last year (135) but slightly less than the heyday of the crazy years when nobody had kids or important careers to keep them from going big.

All in all, it was another amazing year, and I’m continuously astounded at the creativity of my friends. And as noted by many partygoers, there were a LOT of great tasting, unique entries this time around. Usually, there are a bunch of delicious Traditional Guacs to choose from… and a handful of really questionable-tasting (but funny) Alternative Guacs. This year, the Alternatives were AWESOME. So many great ones didn’t get the love they deserve in the votes. So check out the photos to see them all!