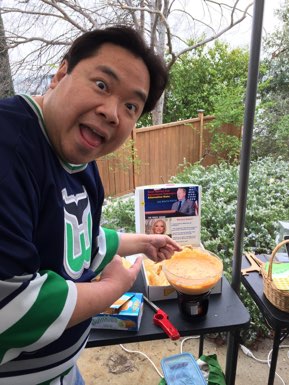 First, if you’re like me and just love perusing photos of various types of guacamole, then here is the link for you: PHOTOS.

Of course, we all knew there would be some Trump-inspired guacamole creations this year. (It happens with each new president; in 2008 there were three Obama entries — and not just because Barack rhymes with guac, though that was a delightful gift from the universe.) But I don’t think anyone expected one of this year’s Donald Trump entries would LITERALLY EXPLODE, creating panic and threatening to destroy the very fabric of the party… an apt metaphor for what our new Supreme Leader is doing to his party. For more on that, see “Icarus Award” below.

But people also made amazing, delicious guacs that should be celebrated, so let’s start with that:

1st place: “Gyozamole” by Michael Zimmer & Teira Gunlock
Zimmer defends his crown! What a year — first he gets married, then he sells a screenplay, and he bookends all that with back-to-back Guac Bowl wins… which is what he will truly remember someday looking back on 2016-17. Michael won last year for his Asian-inspired “Wok-amole,” and this year with Teira they created an Asian-inspired “Gyozamole.” Some may suggest (me, repeatedly) that they went back to the same well — similar taste palate, similar cook-it-in-front-of-you presentation, etc., but you can’t argue with results. People loved the gyoza, filled with all the guac ingredients, and the accompanying cups of dipping sauce. And the aprons were nicer this year too.

2nd place: “Guinkies” by Maurissa Horwitz
In a virtual repeat of last year’s category, another adorable entry by Maurissa is again bested only by Zimmer and his creepy obsession with Asian-fusion. But what an attempt Marissa’s was this year, a truly impressive entry in both display and taste. She created “Guinkies,” a guac-filled version of Hostess Twinkies, complete with cellophane wrapping, and professional-looking Photoshopped packaging. The Twinkie sponge cake seemed to be a corn-bread style, which perfectly matched the creamy guacamole centers.

3rd Place: “Tuscan Guac” by Maggie Flynn & Ian Nyeste
Brazenly described as “The Ferrari of Guacs” on their sign, Maggie and Ian took a Steve Coogan-esque “Trip To Italy” with their Tuscany-inspired creation. The delicious dip was made of avocado, white beans, basil, cherry tomato, cucumber, and garlic… And of course, served atop slices of baguette, like a proper bruschetta. These guys always bring it with their Alternative entries, having won twice and placing thrice.

1st place: “Ex Guacina” by Adam Pava
For years, I’ve wanted to build a guac-bot (haven’t we all?) and the sci-fi thriller “Ex Machina” finally gave me the perfect pun. The mannequin was designed to look like Ava The Sexy Robot (her full name, probably). I bought it at Creepy Mannequin Warehouse ‘N Horror Movie Set (not it’s real name), and went to work spray-painting her silver and creating a mesh/fishnet outfit. Ava’s see-through midsection was the obvious place to put the guacamole, but was the most challenging aspect to figure out; I ended up heat-bending a sheet of plexiglass, and affixing that with a hinge, so people could open her up. Then you had to navigate a tangle of flashing LED wires to access her delicious guacamole innards. Because we were never testing Ava… Ava was testing us.

2nd place: “Guinkies” by Maurissa Horwitz
Not only did Maurissa’s “Guinkies” come in second in Alternative, but ALSO in Presentation AND the Icarus Award. That means, her guac was runner up in every category it was eligible in! It’s the first time that’s ever happened in Guac Bowl’s 15 year history. Quite an extraordinary run of “almost winning” — but don’t feel too bad for her, she’s taken the Alternative trophy before, in 2013 for “Tater Guacs.”

3rd place: “Guacy Cotton Candy” by Angela Pava
A few years ago, Angela and I were gifted a cotton candy machine by my aunt, and it’s been patiently waiting for its moment to shine at Guac Bowl. This year, Angela finally decided to take the challenge, and figure out how to infuse guacamole flavor into cotton candy. She used real avocado extract, jalapeño oil, and lime extract to flavor the sugar and give it a spicy kick. The cones were home-made as well, each one consisting of two corn tortillas rolled into a stick, then fried and dusted with lime-sugar. It was a bold attempt, hampered only by the fact that the machine took forever to spin enough sugar for each cone, so poor Angela was stuck making them all day.

1st place: “Traditional Guac in a Bowl That Kind of Looks Like An Avocado” by Justin Byrne & Liz Nico
Guac Bowl newbies take the Traditional category again! I have a long-held theory that this is the trophy that first-time guests have the best shot at, a hypothesis backed up by no data. I guess I could scroll through the list of past winners, but recent memory tells me this award usually goes to either (a) a newcomer, (b) someone in the Lee family, or (c) Shahan before he retired on top. Justin and Liz actually entered two guacs, a traditional and alternative, which is just the kind of ballsiness it takes to win as rookies. The guac included all the normal ingredients minus onion and cilantro, because, to quote Justin, “Liz hates onions and isn’t too fond of cilantro.” Therein lies gold.

2nd place (tie): “Out of Mo-League” by Brandon Oropallo
A fascinating story here: Brandon is perhaps the most celebrated winner in the Presentation category, but was frustrated that the taste of his guacs was always over-shadowed by his huge, awesome presentations. It’s hard to concentrate on flavor after sticking your hand up a giant papier-mache nose, or scraping the guac off his face with “Five O-guac Shadow.” But I get his point. So much like Michael Jordan in 1993, he quit the sport he was champion of to play a new game — instead of basketball-to-baseball, it was Presentation-to-Traditional. In both cases, the gambit didn’t work out. Lesson learned — your fans love you for what you do best. Fun note: Brandon’s secret ingredient was caramelized onions, but he used green food coloring to keep them from turning the guac brown. A noble attempt.

2nd place (tie): “Avocado-Kedavra” by Josh Lee and Allison Meredith
This Harry Potter-inspired entry is named after Avada Kedavra, the unforgivable killing curse, but there’s nothing unforgivable here. After winning the trophy last year, Josh is unable to re-claim that golden snitch. A Siruis contender, but it just couldn’t conjure the same magic. (I don’t blame the guac, I think it just arrived after many people had already voted.)

3rd place: “Guacter Strange,” by Julie Lofrano
Thank god for new movies, giving us new guac puns. “Guactor Strange” was a great title, but actually not that strange as far as guacs go, as it used all traditional ingredients. The Ancient One foretold “that ritual will only bring you sorrow,” which I guess was referring to coming in third place?

1st place: “Sean Spicy & Quesoanne Conway’s Alternative Guac” by Alex Woo, Whitney Friedlander, and baby Hudson
So much to say about this. I don’t think there’s ever been an guac that deserved — nay, DEMANDED — the Icarus Award more than this one. Alex and Whitney’s entry was a bowl of queso-dip (which in Sean Spicer and Kellyanne Conway’s “alternative-fact” world, was deemed guacamole). Hilarious already. But THEN, the Sterno can used to keep it warm accidentally over-heated the glass bowl, shattering it — spraying a volcano of queso cheese lava onto the table and patio. AMAZING. So first, we have to acknowledge the uncanny coincidence that the guac that literally exploded by fire, won the award named for a mythical figure that exploded by fire. That’s not so much “symbolic” or “metaphorical” as much as it is “the literal definition of Icarus.” Second, the fact that it was a big, bold idea that failed because of a lack of forethought and planning — well, if that doesn’t sound exactly like a Trump executive order, I don’t know what does.

2nd place: “Guinkies” by Maurissa Horwitz
We’ve already discussed these above, twice, but I just want to add how strange it is that something can win second place in taste and presentation, yet still get 10 votes for Icarus. It was too good to be bad!

3rd place: “Guacy Cotton Candy” by Angela Pava.
Also discussed above, but I can understand these votes. The moisture in the weather wasn’t kind to the cotton candy, which slowly dissolved, leaving empty, sticky-green tortilla sticks. I love you, Angie.

Don’t forget to check out the photos, and thank you all for another amazing year!