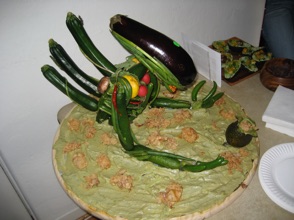 I received the following email today from an “anonymous source,” asking to be posted on the blog. It’s a response to my post “In Defense of Tradition,” two entries down. I leave it to you, the discerning reader, to draw your own conclusions:

Hi Adam, longtime fan of the site. As you know, Rob Saccenti won “Best Presentation” last year for his wonderful — but controversial — creation, GuacAlien. I had the chance to interview him for an upcoming article about this year’s event. Here’s an excerpt:

For readers unfamiliar with the work, “GuacAlien” deconstructed classic party staples — such as the veggie tray, fried finger foods, and of course, guacamole — and reconstructed them into an intricate, edible reimagining of HR Giger’s classic “Alien” design (from the 1979 Ridley Scott film).

The display itself consisted of a layer of guacamole “slime,” in which sat a hollowed-out avocado “egg,” out of which were born thirty or forty fried calamari “facehugger” aliens. The piece d’resistance — as well as the apparent source of most of the controversy — is a torso of an adult “Alien” presiding over the whole display, built entirely out of vegetables, but not avocado.

“It’s total bulls**t,” rebutted Saccenti, when asked about the incident. “You know, it’s funny. If I would have just stuck some Alien action figures on there, made out of plastic, it would have been, like, no big deal. But no, I made the alien out of things you could actually dip into the guacamole, and suddenly there was something scandalous about it. I just don’t get it.” Saccenti seems to believe that it has to do with people’s memory of the previous year’s winner, “Guaczilla” — a creature created using guacamole, avocado skin, olives, and tortilla chips. “Suddenly there’s a rule that no matter what the rest of your display looks like, if it features a movie monster, that monster has to be made out of 98.5% avocado products, apparently.”

From talking with him, I got the sense that he’s a little bitter about the whole thing. “It just left a bad taste in my mouth. Oh, no… (grins)… Not the guacamole; I mean the controversy. How would you feel? I had friends tell me they loved the display, but then said otherwise in the documentary, behind my back.* Then I had people complaining about the name. The name! Nowhere in the rules does it say it has to be the cleverest of puns.” He sounds out for me phonetically: “Guac-a-mole. Guac-a-lien. I thought it worked fine.”

However, Saccenti says he’s put it all behind him now, and with GuacBowl ’09 right around the corner, his focus is on the future. He’s already working on this year’s piece, but promises what he thinks may be another controversial entry. When I asked him for a hint, he gave me a sheepish grin and said “I have a really bad feeling about this… but it’s coming together. Go big, or go home, I guess.”